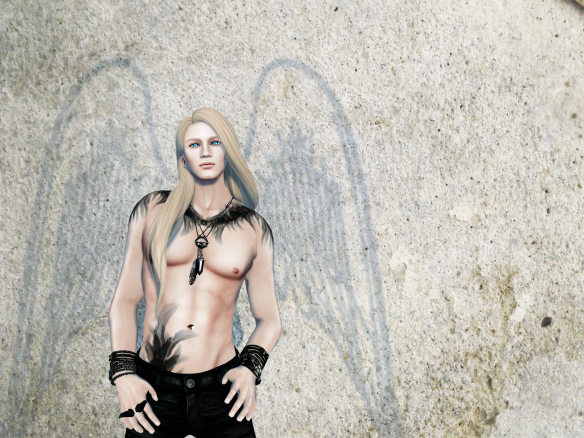 Almost forgot about this guy, Ashiel Winterborn. He is more of a concept, rather than a real character so far. I never really got to play him as a character in RP, yet. But maybe that will change, now that he got a fresh makeover.

Ashiel is an angel who did not fall, but fail. He was sent to earth without his powers or his wings, to correct his mistake. That’s the basic idea behind this character, sadly he does not have more of a story to him.

Meet Leon Hyde! Wait, Mister Hyde? No, Doctor Hyde. For obvious reasons also called Jekyll by some of his friends.

With an English Father and a French mother, Leon grew up bilingual. At the early age of six, he started to play the piano, and it would become one of his greatest passions in life. As a child, he was rather small and timid, which caused him to be the target of mockery more than once.

Today, Leon is no longer skinny, but his kind and gentle nature has not changed. However, life has left both his body and soul scarred, and he has learned to be hard and cold as steel if neccessary.

When he was 17, he lost his brother in a motorbike accident, he barely survived himself. Leon still walks with a limp and while his clothes cover the scars on his leg and hip, his beard cannot quite hide the one on his jaw.

Leon complied with his dying brother’s last wish and became a doctor instead of a professional pianist. Today he is known as a brilliant surgeon who loves his job. He spends his little spare time playing the piano, listening to classical music or reading. To keep in shape, he does weight lifting, goes swimming and plays golf.

Leon cleary is one of my favourite characters ever. He was only created recently, but “came to life” very quickly. He is a bit different from my other characters, not only due to the fact he is more mature. I love to play contradictory characters that have many facets to themselves.

Just to make this clear, kids, this young man is not a role-model! Whether HT is a true culprit or a victim is not quite known, though.

A few years ago, he was found, drugged into oblivion, in a run-down appartment with a broken window. Below that window, they found the body of a prostitute.
HT claims to be innocent and says he does not even remember what must have been the party of his life. Nothing was found to actually prove his guilt beyond abuse of illegal substances. He served his sentence and after he was set free, could neither find a place to live, nor a job – until he ran into Corvus, who was desperately looking for someone to help him around the [hate this] warehouse.

Corvus doesn’t judge people. For him, the young man smelled about right – which was enough for the Kitteh to hire him and allow him to move into the warehouse.

Originally, [hate this] was founded by two people, Rubicon and me. HT was created as a business account to be used by both of us, but after Rubi left SecondLife, I continued to run the store under my own name. Sometimes, I use HT as a photo model, and while I was having fun with some friends, he got his background story.

Every once in a while I pull him out to run him through a hunt or two, or simply go freebie hunting. And that’s exactly what I did today (and why this post is a bit late).
Through the generous gifts for the Men Only Hunt, HT got a complete makeover today. And while I will admit, the outfit isn’t quite my usual style, I still had a lot of fun putting it together.

Moran is not paranoid – they are after him. Being an elite hacker, however, he knows how to cover his tracks. Quietly, he moves from one place to another, while he recovers from an assault he barely survived.

Moran suffered severe amnesia due to his injuries. All he remembers are his hacking skills, and he is fluent in both English and Russian.

Now, Moran is using his skills to comb through the most secret parts of the grid, hoping to find a trace of his former self.

Moran’s name was taken from the Sherlock Holmes books by Sir Arthur Conan Doyle. Sebastian Moran is the right hand of Holmes’s arch-enemy, Professor Moriarty. The original, Hebrew meaning of the name is “teacher”. Both do not have anything to do with “my” Moran as a character, I just liked the name.

Nathan’s mother was a wild jungle fae, his father a human clockmaker who served as a soldier in the colonies. Nathan grew up with his father, learned his trade and took over the clockmaker’s shop after his father died. One day, he was captured by air pirates who held him prisoner and forced him to maintain the engines of their airship for several years, before Nathan could escape.
He does not remember how he ended up in this world, but it looks like he has settled in here quite well.

Nathan dreads cold and rainy weather, his mother’s blood is strong in his veins and he can’t wait for summer.

Nathan is a character I could go on about for ages. Or write a book about. I have actually started, but meh, I’m lazy and stuff. I don’t use him very often in RP, but I still like him a lot.

(*) from the current round of The Challenge – Underwater. Here’s a young woman you don’t want to mess with. Too clever for her own good, Chanda decided to study genetics, in order to find a cure for vampirism. She wants to help her mother and godfather, who are both affected by what Chanda believes to be a genetical mutation.

She is very dedicated to her studies, but never forgets to have some fun, too. She has quite the reputation for playing friendly tricks on her fellow students. Rumours have it, she has fairy blood running through her veins.

In her spare time, Chanda works as a model for [hate this].

Originally, I simply created Chanda as a female model for my store, with no intention to turn her into a full-fledged character. Her main purpose was to look cute, with an edge to it. No offense to those who love their barbie girl models, they sure are pretty. It’s just not me. (*) Chanda’s hair changes a lot, but it usually is either ginger or copper, rarely blonde. As a character, she is a redhead.

A few words about her outfit: I don’t normally shop for female clothes and my selection is very limited. The coat is meant for male avatars. To make it fit, I reduced her breast size to 20 (usually, it is around 45). I like the tomboyish look on Chanda, but if you want to keep your cleavage, you are probably better off looking for another coat. 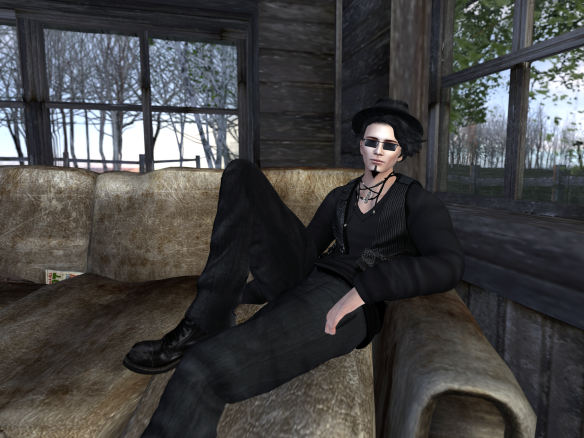 Today, I’d like to introduce Marten, an aspiring violin virtuoso from Amsterdam. Despite his young age, Marten is a widower.

He met Annie, the love of his life, in music school when they were still teenagers. As soon as Annie turned 18, they got married and moved together, but their luck only lasted two short years before Annie became severely ill and passed within weeks.

If you ever get to meet Marten, you will find him very reserved, maybe he won’t even talk to you. Please don’t take it personally. He does try to carry on, but his only comfort is his music.

I have debated for a while whether to introduce Marten as a character. His tragic story sure isn’t for everyone – and isn’t meant to be. Annie never existed as a character, though, she is just part of his tale.
On the other hand, and the reason why I did introduce him here, is the fact I love to use him as a model. Maybe I am the only one to see the pain in his eyes, but knowing about him, his story, helps me create a certain mood for some photos. I am not sure if that makes sense to anyone else, but that’s the way I tick.
Marten’s name is inspired by the main character of my favourite webcomic, Questionable Content, and the short story The Music of Erich Zann by H.P. Lovecraft. The story is about a voiceless violinist who keeps away demons with his music.